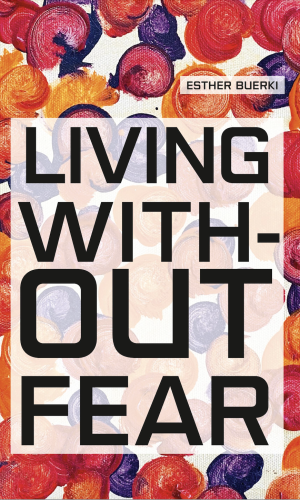 Do you know this? You had a dream, and it took a few years for it to become reality? And then you can hardly believe it when it does.

That’s what happened to me with my book “Living Without Fear”, which I finally have in my hands as a printed book. I can hardly believe that this is now the book that I had been carrying around with me for years and that I decided to write when I attended a three-day workshop with Gerry Robert in Zurich three years ago.

His workshop gave me the courage to create the cover of my book and share it all over my social media channels. “I am now writing my book. It’s titled ‘Living Without Fear.’ And you can ask me about it anytime. I will not give up until it is finished.”

Great feelings but only for a short moment

It really took courage, but it also felt really great. Although only for a short moment! Because after this, the self-doubt kept visiting me. Who would want to read my book? Nobody is interested in why I suffered from depression for years and had suicidal thoughts again and again, because I saw me as a failure again and again. What good is my story to others, I asked myself.

Every time I wrote another chapter, I felt good and felt that my writing made sense.

If I then took a long break from writing because I didn’t feel good enough or because life threw new challenges at my feet, shame rose up in me. Why had I opened my mouth so wide? I could have started writing for myself and published my book when it was ready. No, I had been so cocky. My social media posts on Facebook were seen and commented on by many, and I knew no one would forget my announcement.

And then Covid hit. Fear crept in. Collectively. Everyone was afraid of what would happen next. No one knew how long it would take and what else might happen.

I felt obligated to make a constructive contribution to fear. But I didn’t know what to write – knowing that what I wrote during the lockdown wouldn’t get into readers’ hands until much later.

So I stopped my book writing project and started my podcast titled ‘Living Without Fear’. Why in English and not in German?

Just before the pandemic, I had been to South India with a small group of women and had shown them the country, the culture, and India’s special way of balancing body, soul, and spirit. I felt very connected to those people in India we met, and I knew from earlier travels during that special time. So I wanted to provide them with a small, encouraging message every day. And for this reason, I decided to use the English language.

I never dreamed that some of those short texts I wrote for the podcast would later find themselves in my book. That idea came to me much later. But they have exactly the right place now. Because the second part of my book is meant to give you help with quite a lot of topics like self-love, self-worth, and self-discovery for every day.

For a long time, I put off editing my texts or put other things, “more important” things, in between. I also struggled to find a suitable editor. The one I finally found was convinced that my text didn’t need great editing services but was very fluidly written and more in need of good proofreading.

So, I set out to find a proofreader.

Even sending my text to the editor had taken me a great deal of courage. I was full of self-doubt that she would tell me: Your text is all well and good, but it needs a lot of revision of your thoughts. But no, contrary to my expectations, she found my text very well written. And the proofreader also sent me positive feedback.

A former colleague and friend also motivated me to publish my book. She had read it through in one go and reported back to me that my text had touched her very much because we had a similar story.

Each of these positive feedbacks encouraged me. But after that, the self-doubts kept creeping up and settling in my brain, like in a cozy living room with a sofa. They sat there, those self-doubts, and kept saying, “Esther, who do you think you are to touch, motivate, and inspire people with your book?”

At every further step in the book’s production, the self-doubts signaled again, “We’re still here, and we want to save you from a major debacle. Because when the text came back from the proofreader, I had to read once again my whole story in order to accept her changes made in proofreading mode and check that everything was now all right.

Esther, you could have written this better!

Another time I read my book all the way through when it came back from London from the translator. While re-reading, in so many places I thought, oh, Esther, you could have written this better, or this passage could have been deleted. Or does this chapter even make sense?

But I decided to stick with my initial courage and keep going.

With the graphic designer came another person who read my book. And when he had laid out the text, I had to deal with my text another round, not only once, but just twice, in German and in English.

But by now my self-doubters had become quite weak on their comfortable sofa in my brain. They kept making themselves heard, but their voices had become increasingly quieter. The thought “Now I will soon publish my book” became more and more determined. Now nothing could divert me from my path.

Fortunately, I had had enough of this eternal harping on my book content.

And even if the book will be criticized in the future, I (almost) don’t care. Because I know that it has already helped my translator to look at certain things differently and handle challenges differently. And also in her writing group, one of my thoughts from the book has taken root and helped further.

A pleasure to read and it inspires

Moreover, just today I received a message from America that it is a pleasure to read my book and that it has inspired the writer to edit his own texts.

So, I wish that “Living Without Fear”, my biography and the many thought-provoking impulses, will help you too and a few other people to overcome their fears and depression and to lead a better life – in joy and peace with themselves and the rest of the world.

Find more details about the book and a special gift for you here: www.livingwithoutfear.ch